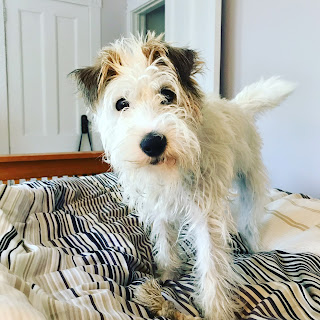 We got a Jack Russell Terrier about a year and a half ago. Her name is Jackie Blue ("Sausage", for short) and she's a great little dog - cute, good-natured, energetic and intelligent. She's also stubborn as hell. And lately she's started having allergy symptoms, which makes looking after her a full-time job. If we don't keep a sharp eye on her, she'll sneak off and lick her paws raw while we're not looking. It's frustrating and exhausting for everyone. We finally broke down and bought a "cone of shame" so we can leave her unattended for a few hours at a time, but she hates it so we use it as little as possible.

The frustrating thing about allergies is that it's so tough to identify the source of the problem. Is it something in her food, something in the environment, or some combination of the two? Our vet's best guess is that it's environmental but we're limiting her diet too in case it's a food allergy - which is tough for a dog who's always been fed some people food in addition to Husband's homemade dog good. If it's something in the environment, our hope is things will improve when the snow flies. In the meantime, we're treating the symptoms, keeping a close watch on her, ensuring she gets enough exercise, and trying not to get too discouraged.

And of course the allergy has made things worse because, in addition to all the usual services we provide, we have to bathe her feet, medicate her, watch her constantly, and find new ways to entertain her that don't involve walking or running on gravel paths, which are hard on her tootsies at the moment. It's bloody exhausting. And, to be honest, part of me wonders if it's all an elaborate ruse to motivate her humans to pay more attention to her.

Whatever. So long as she keeps looking up at us with that adorable face, I don't suppose we'll have much choice but to do as she commands.

Popular posts from this blog

October 24, 2018
When I arrived home last weekend, it was to news that Husband has successfully installed a new water treatment unit - which involved a fair bit of old-fashioned plumbing and rewiring. He was rightly proud of his accomplishment since it was a beautiful thing to behold.

Then on Sunday the toilet in the upstairs bathroom began misbehaving, so he spent a good part of yesterday buying parts and doing the necessary repairs.
In between, he was busy chopping and hauling wood, cooking, cleaning, doing laundry, packing the car for my return to the city and seeing to various other chores, while I mostly hung out by the fire keeping Jackie Blue company.
When I stop to think about it, it's scary how dependent I've become on him to do home repairs and other chores, and seriously doubt my contributions to our household are even remotely comparable.  These days, those contributions are largely financial and organizational, with a little gardening, cooking, puppy care and cleaning thrown in.…
1 comment
Read more

December 05, 2018
I couldn't sleep so got up earlier than usual, intending to write for awhile before heading to the office. Instead, I spent 45 minutes reading blogs written by several friends, each of whom is doggedly pursuing their dreams. I'm so glad I did. It's inspiring to be reminded that there are smart, talented people whose lives aren't focused on job titles, how much they make, or what they consume.

I especially need that reminder as I grind my way through these last few week of full-time employment. Though my decision to retire was carefully thought-out, a small voice continues to insist I got it wrong - that I'm going to regret giving up the generous paycheck and professional identity that goes with it.

The truth is I probably will miss those things. But the payoff is a lot more free time and, at this stage of my life, it's time I value most. Time to walk amongst the trees and breathe deeply. Time to be kinder to myself and others. Time to think about what matters m…
3 comments
Read more

November 17, 2018
I gave formal notice of my retirement a week or so ago. It feels good. Mostly. Other than when I'm overcome by doubt and anxiety, that is.

I realized this week that I'm not worried about having too little to do. In fact, it's the opposite. I've been adding to my list of "things to do when I retire" for so long now it's become overwhelming. Even if I were to jump out of bed every morning at dawn and work 10 to 12 hours a day, it would take decades to get through the whole list.

The answer, I think, is simply to set priorities, create a plan, and be gentle with myself when life intervenes, as it almost certainly will.

From past experience, I know that the plan will need to include a little of this and a little of that, with plenty of white space for procrastinating and daydreaming, if I'm ever going to stick to it.

So, for the first few months, I'll try to ensure every day includes at least 30-60 minutes of exercise, quality time with family and fri…
2 comments
Read more